HPC road trip: Driving to Oslo and back with an electic car

Why are we doing this trip? First of all, whenever we discuss electric cars, there are questions about how the battery lasts in the winter, or how to cope with charging on longer trips. We also recently opened a chain of  High Power Charging stations  -  they're located in Lohja, Kristinehamn, Västerås and Nygårdskrysset, connecting Helsinki, Stockholm and Oslo. The HPC chargers are awesome option for newer EVs, as you can charge on a much higher power compared to 50 kW chargers.

Who are we? We have a team of 3 women from Fortum Living & Mobility; Maija, Laura & Lillemor. Maija works as the International Marketing Manager at Fortum Charge & Drive, focusing on the SaaS business platform for operating EV charging networks. She's a Finn-Australian who has a 40 kWh New Nissan Leaf at home. Lillemor is the E-Mobility and Charging Marketing Manager. Both she and her husband have driven EVs for many years already. I, Laura, work as the Content Manager at Fortum Finland - I don't own a car but am very enthusiastic to try out the new Kona! 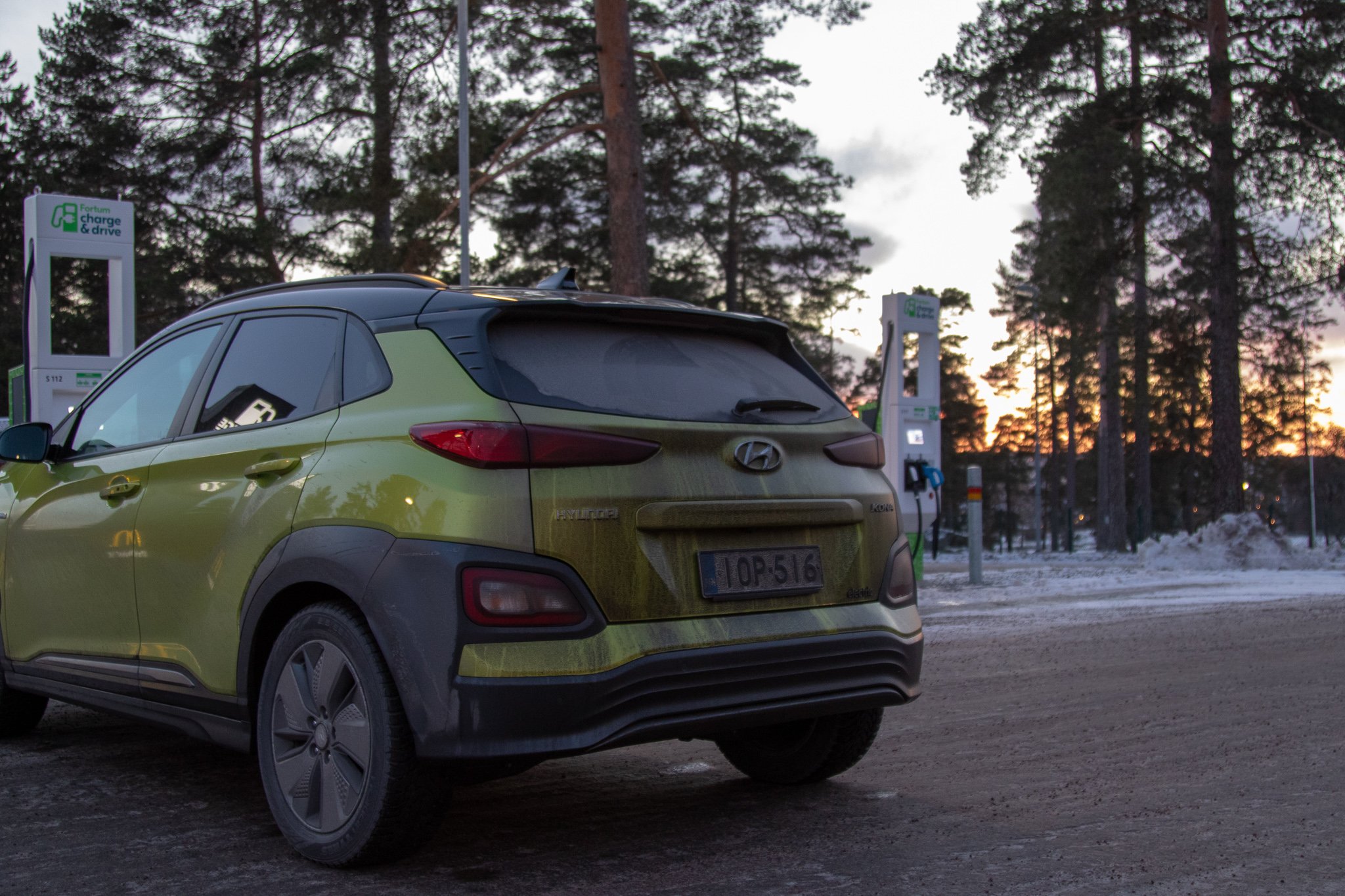 We left Helsinki on Sunday afternoon with a Hyundai Kona Electric (here's a link to a review from Helsingin Sanomat in Finnish) and headed first towards ABC Lohja to meet S-ryhmä's development manager Tiina Vehmala-Viksten. We interviewed Tiina and tested the High Power Charger at the same time. As the Kona still had plenty of range left, we didn't stay charging but continued our way to Turku. We reached the harbour early and after making a couple of u-turns trying the find the correct route to check-in, found our way in the ship.

First day recap: Started with 298km range, ended with 165km left. It was snowing the whole evening, with -3C outdoors (+22C inside the car!). More details about charging & consumption on this trip in the end of the blog.

Interview of Tiina Vehmala-Viksten about the charging services at ABC.

In Stockholm we first visited Fortum's office. The office building is in fact over 100 years old and was the first electricity plant in Stockholm! We explored the indoor "winter garden" cafeteria, which has live trees in it!

The navigator calculated that we had enough range until the next stop, so we were good to go! ...Until we noticed we weren't. The navigator had calculated the range on a lower speed we ended up driving, and so the range dropped faster than expected. To be honest, we just weren't paying attention. We slowed down to save range and started to look for chargers closer to us. Luckily we found a good option and even gained some of the range left back by slowing down. Funny enough, the closest option was a Hyundai dealership! They welcomed us to charge happily and so we hanged out with their office dog for short while, before continuing our way towards Kristinehamn. This was a good reminder - pay attention to not only the range, but also your speed!

We spent the night in Karlstad's Elite Stadshotellet. They had a couple of Schuko chargers in the garage so we used to opportunity and left the car to charge through the night - they were kind and did not charge us for it, which was great! In case you would stop there, try the hotel restaurant's fish & mussel stew.

General Manager of Elite Stadshotellet Karlstad, Anna Björkenstam Wedberg tells about their approach to sustainability and charging services at the hotel.

From Karlstad we headed to Nygårdskrysset's HPC station on Norwegian side. There we met some colleagues who told they opened another HPC station nearby on the same day! We heard Norway is expecting a high influx of EVs that can handle High Power Charging, so Fortum Charge&Drive is already preparing.

Elise Aalberg Thorvaldsen is the the Customer Journey Manager at Fortum Charge & Drive. In the interview she describes the changes in the industry during her time at C&D, and her own experiences as an EV driver.

From Nygårdskrysset we continued to Oslo, and made it right on time for a gorgeous sunset! We stayed in another very interesting hotel - The Thief. The Thief's core values include sustainability and they for example weight all the food waste from the restaurants in the hotel and aim to eliminate all food waste by cooking in a more clever way. We appreaciate!

The Thief hotel in Oslo takes sustainability seriously. For example, they weight and scan all the leftovers from the hotel's breakfast daily to reduce food waste. Watch Claerisse's interview to hear more!

We woke up to very snowy weather in Oslo. Headed back to Sweden and towards Västerås, the blizzard hit and as it was snowing heavily and the driving conditions were very poor, we decided to have a quick stop to rest a bit in Karlstad. While having coffee, we thought we might as well charge there although the car still had plenty of range left - enough to get to e.g. Kristinehamn's HPC, not quite enough to last all the way to Västerås.

First we realized the cap of the plug in the car had freezed while driving through the blizzard. We tried to get snow out from the egdes with an ice scraper first. Too thick. Nail scissors did the trick and we got it open, only to realize snow had gotten under it and completely filled the plug, packing to every little corner of it. We're still not sure how on Earth that is even possible, as there is not only the cap, but also covers to the plug. We tried to clean it in every possible way but the snow had packed too deep. We knew we had to charge eventually on the way but wouldn't be able to do so without melting that snow. So, we tracked down an indoors garage of a shopping mall. After us having lunch the snow had softened enough so that we could get all the last bits out with a cotton bud and eyebrow brush (resourceful, right?). We covered the plug with some cling film from under and over the cap to keep it clean until we got back to the charger. That worked and in less than half an hour we had topped up the charge enough to head towards Västerås.

While all this happened, the weather had changed from a blizzard to freezing rain - the roads were not only covered in thick snow, but topped with ice and ponds of water on top. We were already running late due to the earlier struggles from our planned arrival to Västerås at 14.30, but we decided to forget about that and drive slow and safe. That was a good call, as we witnessed several dangerous situations where a crash was avoided only by centimeters. Dead tired, 6 hours late, we arrived to Steam Hotel in Västerås. Steam Hotel is an old steam power plant built in 1917 - 100 years later, the building was re-opened as a hotel.

Just like The Thief, also Steam consider's sustainability as one of their core values. They've worked hard to figure out just the right temperature for the hotel and even have their own EV to drive visitors to the train station with.

From Västerås we drove the short trip back to Stockholm, took the ship back to Helsinki, where we returned the car back to Hyundai.

To be honest, when we decided to set off on this trip, we were more preoccupied with fitting ourselves and our luggage in the car, as well as interviewing business owners at the charging destinations, than we were in the details of the charging sessions themselves. Perhaps this was a bit naive, but I imagine this is how the majority of drivers behave... after all, I have never been on a road trip where I calculated the fuel consumption between each stop (taking into account interior and exterior temperatures), checked the precise state of the fuel tank before and after refuelling each time, and/or wrote down the exact amount of fuel I got at each station. That said, just like for a regular road-trip, we did keep track of total costs and total expenses. 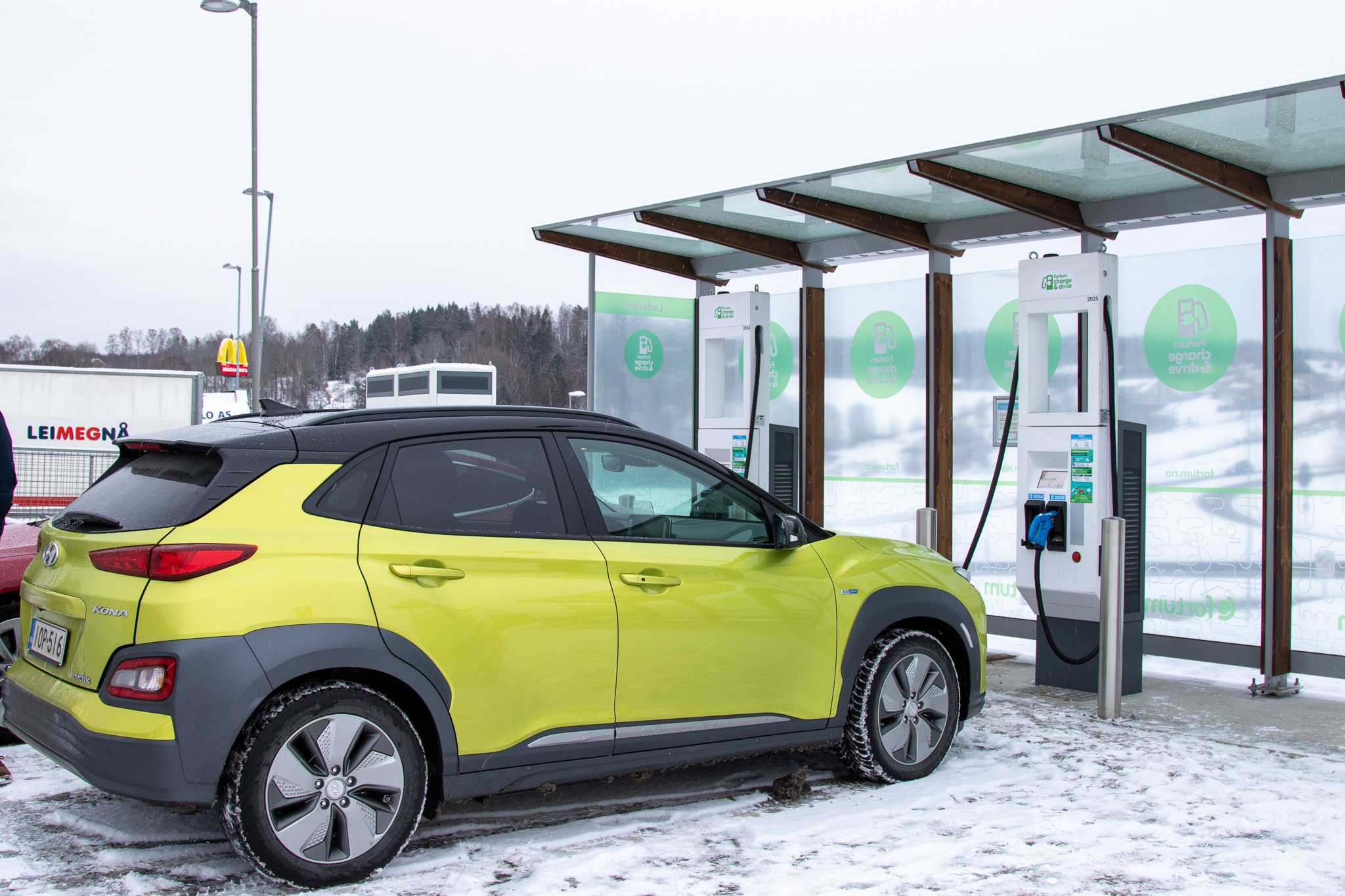 We drove a total of 1372km on this trip, and in total we paid €49.58 for charging; this averages €3.62/100km. We only remembered to check the car's onboard drive information a couple of times, but according to the Kona we were averaging 18.2 - 16.7kWh/100km. After going into turtle mode along the E18 at Örebro, we also paid more attention to our speed! Although the speed limit along most of the highways is 110km/h, we were driving well under that (60-80km/h in heavy traffic, around 90km/h with no traffic) and got pretty decent average consumption, in my opinion. Especially considering we had a heavy, fully-loaded car, average temperatures below 0C, and some pretty thick slush on the roads at times. 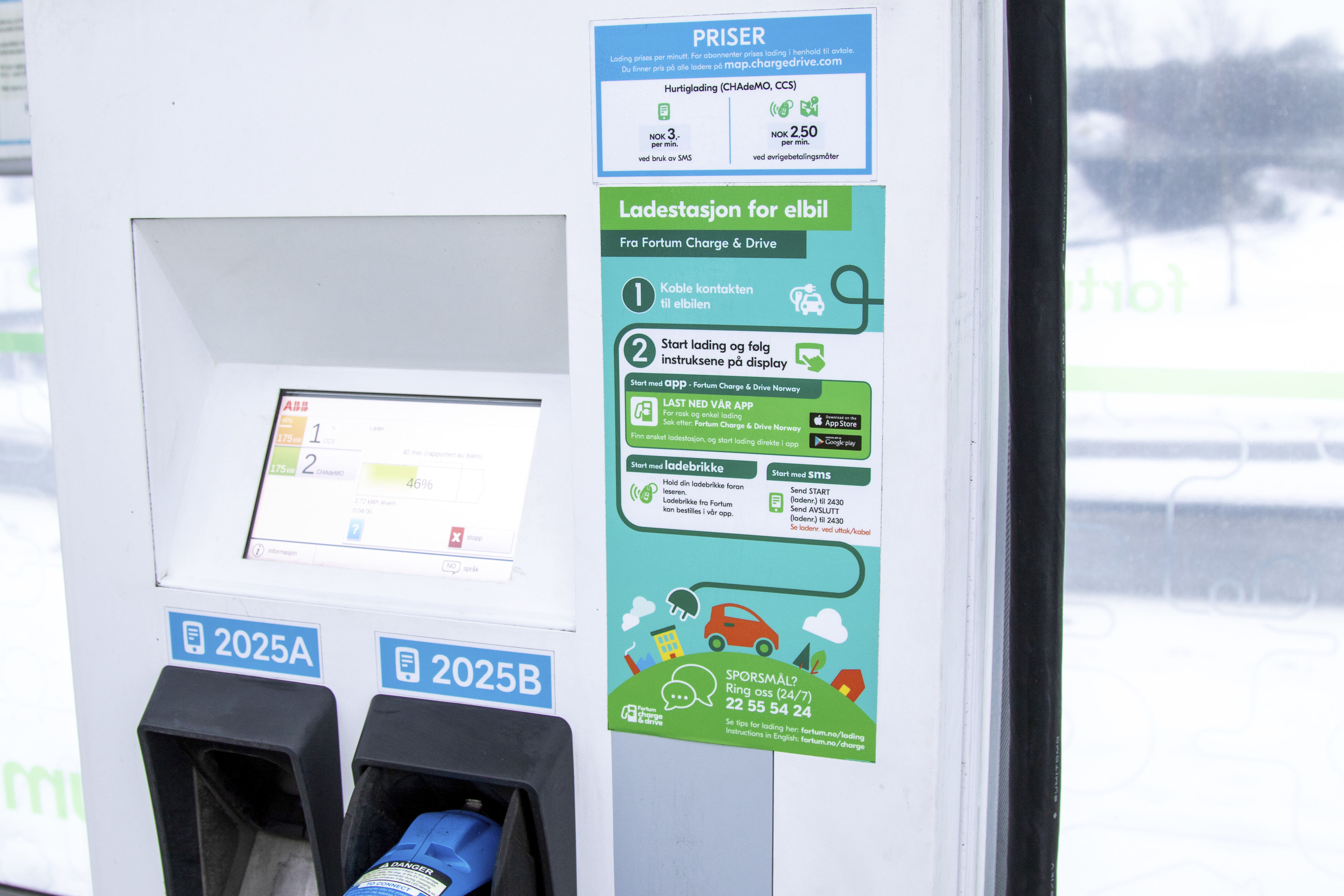 Although our actual charging costs averaged €3.62/100km, there are some things to take into consideration:

When we were running on empty near Örebro, we miraculously found a local Hyundai dealership and they allowed us to charge for free at their own 22kW charger. We were there for about 45 minutes. I'm not sure how much we charged while we were there (we forgot to check the before & after SoC [State of Charge]), but I am fairly certain that if we had run out of fuel in a combustion engine, it's unlikely we would have got free petrol from the nearest business owner.

The Elite hotel in Karlstad kindly allowed us to charge at their EV sockets in their garage for free (normally €5/night). The cost from Tjuvholmen Parkering in Oslo was just for charging; there was an additional parking cost (€37/day), but obviously this applies to all cars and is separate from the charging costs. The underground parking lot is in one of the most central locations in all of Oslo, so if you're looking to save on parking costs, it's good to keep in mind that municipal parking for EVs is free in Oslo (but you will probably still have to pay for charging). Charging at the Steam Hotel in Västerås in Sweden was free. So while we did pay for charging in Finland, Sweden, and Norway, it's worth mentioning that we also got a lot of free charging, either due to business owners who want to attract EV drivers as customers, or government incentives to encourage the update of electric vehicles.